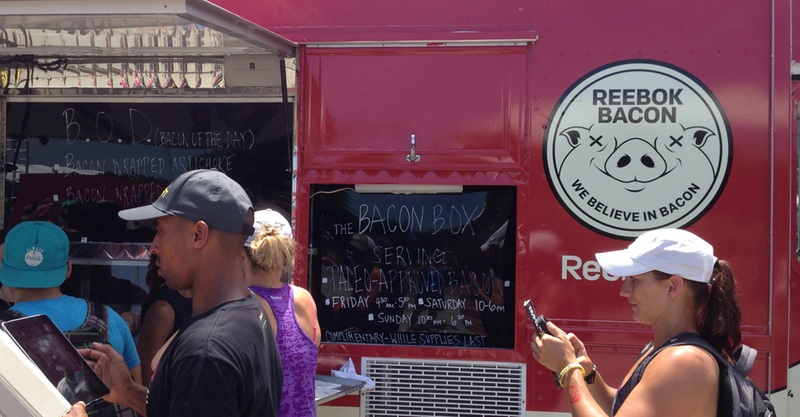 Go to any sporting event, whether it’s a football game or a baseball game, and one thing everyone will be talking about is the food at the venue. It’s no different when it comes to the CrossFit Games, though there is a slight twist to it.

With all the Paleo lovers out there in the CrossFit world, it’s no wonder that the Games themselves try to cater a bit more to this high-ingesting protein crowd. Today we look back a bit at the food of the 2014 CrossFit Games. But let me warn you from the start…it may not be all that exciting for some of you since I tend to stay more on the Paleo side of things (yeah, I cheat quite a bit…but to be honest, there really wasn’t anything at the Games which I would consider “cheat worthy.” Let that sink in…because it will give you a “taste” of what food at the Games is like).

One of the first notable things at the Games this year was the presence of the Reebok Bacon Truck! Yes, folks. You heard it right here. There was a Reebok brand name bacon truck parked prominently right outside of the vendor village. They had a neat little promotion going on during all 3 days of the Games: everyday they would release a new secret phrase on twitter. You would take the phrase (“pig out,” “sizzling sweetness,” and a few others) to the bacon “handlers” at the truck and receive a special card, which in turn could be handed in for free shirts, tank tops, etc.

It was definitely a neat marketing gimmick. But…what you really want to know about is the glorious bacon, bacon, bacon! Each day brought a different type of bacon “goodie.” There were bacon-wrapped dates (which, honestly, …a little too sweet), bacon-wrapped jalapeños (which were quite tasty!), and bacon-wrapped chicken (pictured below). They had so many variations of bacon-wrapped stuff that I seriously thought Bubba and Forrest Gump were back there in the truck cooking!

It got the Games off to a great start. People flocked to the truck and were rewarded with that ever glorious taste of wonderful bacon. The truck was there all weekend long, not only feeding bacon to the masses, but also taking pics for Instagram and printing them out for people as they waited. After the Games, the truck made a few stops at various local CrossFit Boxes to share the wealth of some good ‘ol paleo yumminess. 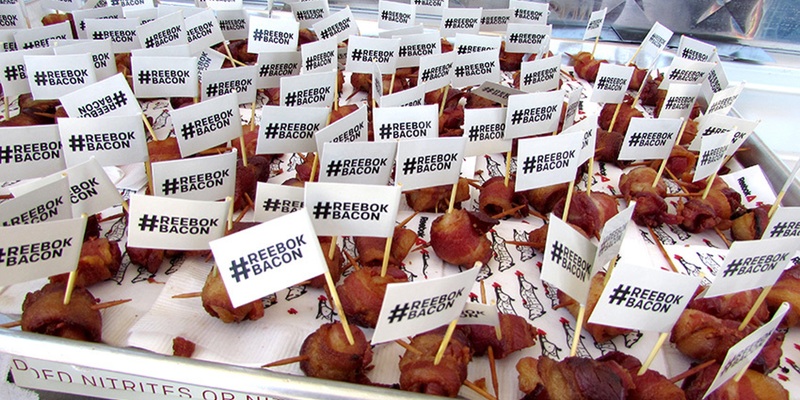 Inside the Vendor Village people were greeted to the likes of various “Paleo” foods. I put it in quotes because some were pretty paleo, and others weren’t quite as paleo as people would like to think…but being the Games, a lot of people were cheating ever so slightly. Yes, there was an ice cream truck in the village, and other types of goodies. But if you were really trying to maintain a paleo lifestyle, then a few options were before you…

Marbled was a big hit with the Games because they were there serving breakfast plates early in the morning. I saw a lot of people with heaping piles of eggs and bacon walking around. As the day progressed they would change their menu over to lunch. Every time I walked by there was an ever present line of people waiting to order. 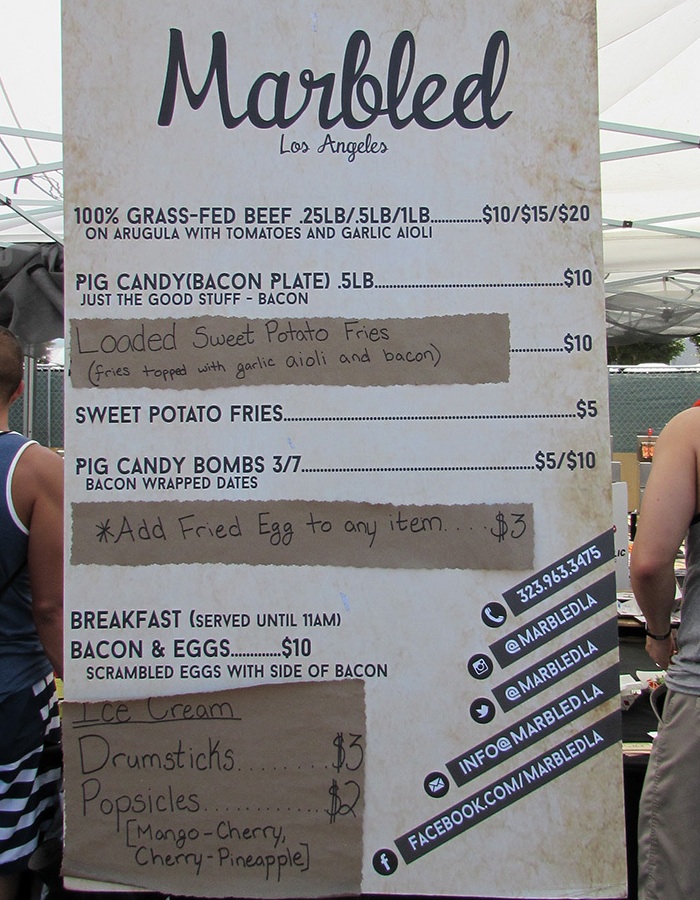 Another big hit with the crowd was Paleo Nick’s. They were a bit different from the other food vendors because they essentially served as a quick stop sort of store. They had prepackaged salads, trail mixes, waters, and “sandwiches” (paleo, of course). If you wanted to avoid the lines and just grab a quick bite to eat, then Nick’s was there to meet your needs. The nice thing about them was that they were giving a percentage of their proceeds to Kevin Ogar’s recovery foundation, so paying the somewhat exorbitant fee was a little easier knowing that a portion of it was going to a great cause. 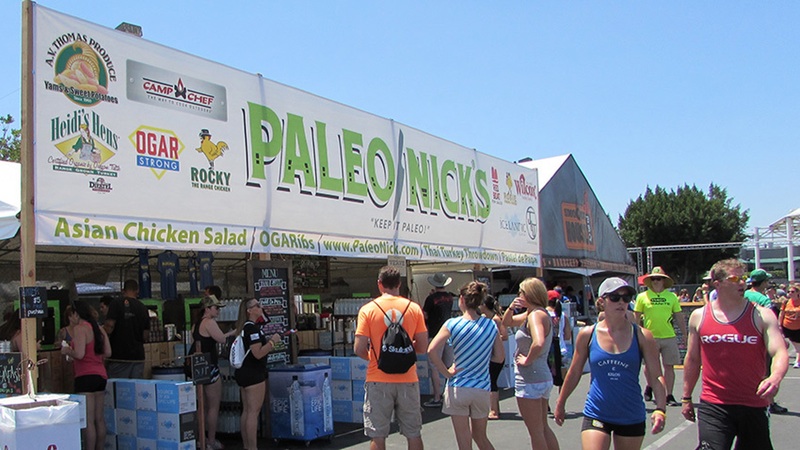 The price at the Games is one thing to keep in mind when you eat at the Games. A lot of the food is not that great for the price. Much of it is over-cooked and can be very dry. Here’s a case in point…a very sad looking meat patty from one of the vendors (below). This lunch, which was as paleo as you could get, was dried out and overpriced (it clocked in at a whopping $15 for two dry patties and wilted salad). 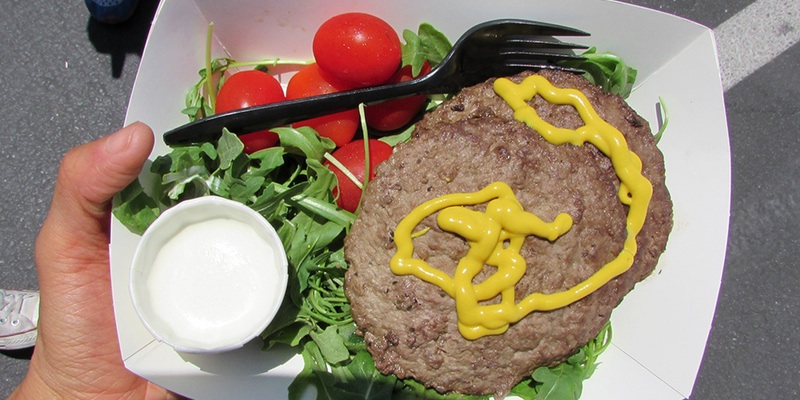 Perhaps the best food I ended up having was the not-even-close-to-paleo meat plate drenched in bbq sauce on the last day of the Games. It was the last day and my resolve was wearing thin. Hahaha. So I caved in and did as the natives…I lined up at the wood-fire bbq pit and ordered the Games plate, a $25 plate of chicken, tri-tip, and ribs drenched in bbq sauce with a bit of sweet potato at the bottom: 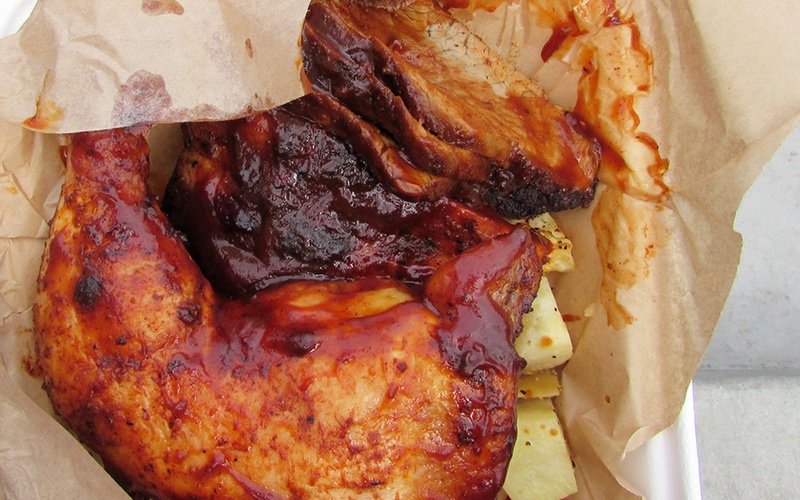 Honestly, it was good. You see, by that point, the sun has been beating down on you all day and your exhausted from the frenzy of the Games. So pretty much anything will taste good by that point. Was it really good? No. It was par for the course of most of the food you will find at the Games. Here’s my suggestion: If you want to eat well at the Games (and this goes for whether you are paleo or not), then bring your own food. The great thing about the StubHub Center in Carson is that they allow you to bring in your own coolers (and these are full-sized coolers!) with as much food as you want. So if you maintain a strict paleo diet, then grab your food container boxes and load them up with that great chicken breast and home-made sweet potato fries! Bring your snacks, your water jugs, and don’t forget to throw in a Larabar or 10! The only thing you cannot bring into the center are glass containers (this goes for water bottles as well…stick with the plastic kind).

So there you have it, the food at the Games is well, a WOD in itself. You really have to work through it. There’s nothing that really stands out. Sorry to depress you all. It’s just not that great. There was of course one saving grace: The ever present … BACON.

Well, folks…that’s all there is to the Games food. I highly encourage you to pack your own but still do a bit of taste testing in the village. But other than that small taste, not much is really worth the price. Probably the best advice I could give you is: stay close to the bacon, because: 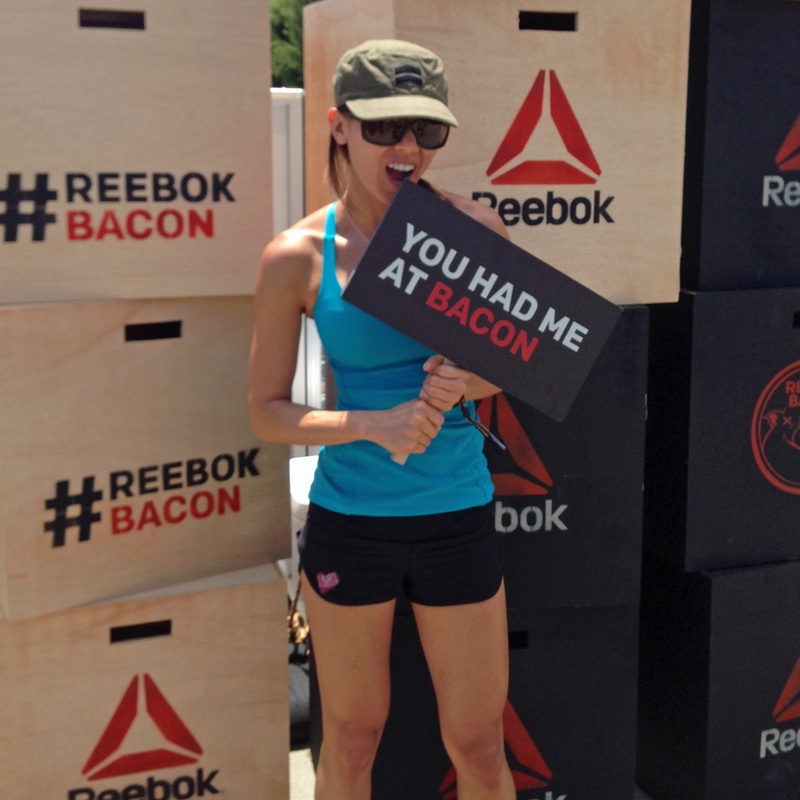 Other articles in our At The Games Series: Vendor Village