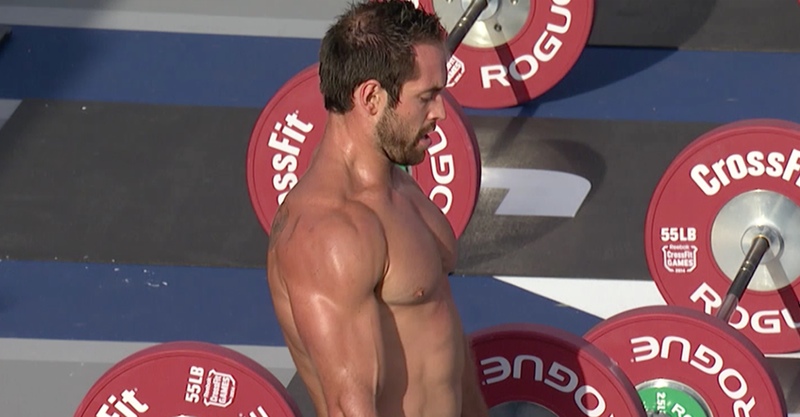 It was a rookie sort of day at The Games, day 2, with rookies Cody Anderson taking the muscle-up biathlon in the morning and Lauren Fisher bringing the stadium crowd to its feet to chant, “Lil Fish” as she completed her final squat clean ladder lift. All in all, there was a lot of nail-biting going on, a lot of rookies coming out and making a name for themselves, and a lot of fans standing on their feet and cheering these athletes on. As the day ends, things are looking up for the champ as he remains at the top of the leaderboard. He had (literally) a few missteps along the way, but at the end of the day he sits atop by the narrowest of margins.

On the teams side, strategy was the name of the game on day 2. As the female team members took to the soccer field, Timberwolf Crossfit set a stunning pace (largely due to their strategy on the medicine ball clean: cycling each team member through the medicine ball reps, instead of taking turns and having individual members doing multiple reps). However, once teams got to the muscle-ups, things quickly changed and Crossfit Athletic came out ahead, that is, until Crossfit 808 snuck in from behind and took the event at the end with the HSPUs.

As the individual men took to the field, they were greeted by a monstrous muscle-up rig which spanned the width of the soccer field. The crowd was on it’s feet when Lucas Parker and Cody Anderson both went through their muscle-ups unbroken in the first round. It was a chase on the 400m run (CrossFit style, because we all know Castro can’t have a normal run in The Games. For this, athletes had to climb the stairs of the StubHub stadium, then run uphill under the jumbo-tron, finally descending the stairs on the other side of the stadium and back down onto the field. 3 times, folks! 3 times! My legs were on fire just watching from the stands). First it was Parker, then Anderson, then Parker, and finally Anderson (it was a nail-biter!). The rookie took on the veteran and stood his ground.

Things soon took a turn when Anderson reached the rings first, and then he never looked back. Parker dropped and went for a 200m penalty run as Anderson began his final round. It would be Anderson with 3 unbroken sets of muscle ups (Holy blown-up triceps, Batman!!!) who would finally take the heat (and the entire event) with a time of 10:43. 2nd place (in this heat) eventually went to Parker, who was a distant 13:58.

Ben Smith (11:15) and Chris Spealler (11:17) would put on a crowd pleasing show in the next heat, but the two vets couldn’t catch the rookie. In true CrossFit work ethic style, Tyson Takasaki worked to the very last second and almost beat the buzzer, coming in about (literally) a foot short.

For the final heat, Froning came out strong and was about to pass Bridges on the 3rd round of muscle-ups (Bridges had fallen and was out on his penalty run), but the champ fell short by 1!! and had to run his only penalty lap. A groan was not only heard, but felt, in the marrow of everyone’s bones as the champ fell to the pitch. In hindsight, this misstep was a foreshadowing of other hurdles the champ would face throughout the day.

When the athletes entered the tennis stadium, things got real, head-shakingly serious. What awaited them? A squat clean speed ladder. Working in heats, the ladies took the floor first. Racing through 5 lifts, each progressively getting heavier, the women blazed across the court. Making a notable try was Talayna Fortunato, who has been hampered all week by a leg injury (from the very first event at the beach!). She wasn’t able to finish the sequence, but went to the finish platform to the thunderous applause of the stadium. 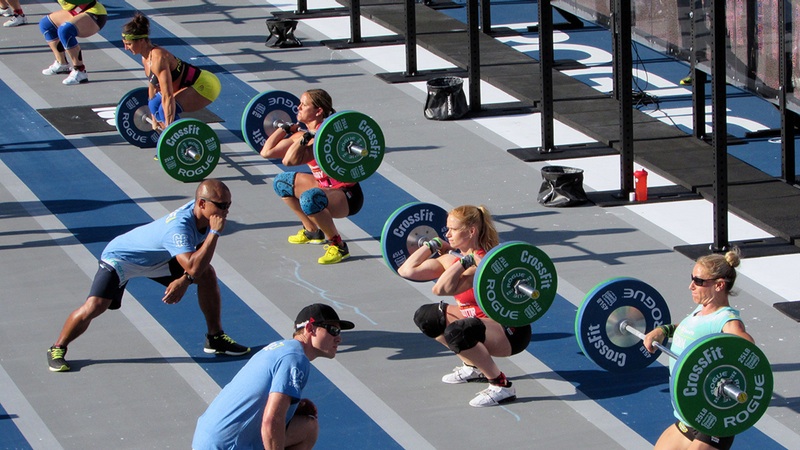 These women’s heats were incredibly fast leading into the final. Mere milliseconds separated competitors. Akinwale blazed through the final round, showing her strength and endurance on each of the lifts. Though she struggled on the last 225lb lift, she finally got it up (though she may have sacrificed her back in the process…but it appears as if she’s ok). Though Akinwale won the event, it was Lauren “Lil Fish” Fisher who won the hearts of the crowd. After a failed attempt on her 225lb lift to finish the ladder, she went back for one final pull. As she approached the bar the crowd started chanting “Lil Fish” at the top of its lungs…rising up out of the deepest of squats she cleaned that weight, jumped up on the podium, and gave a smile and wave for the crowd. 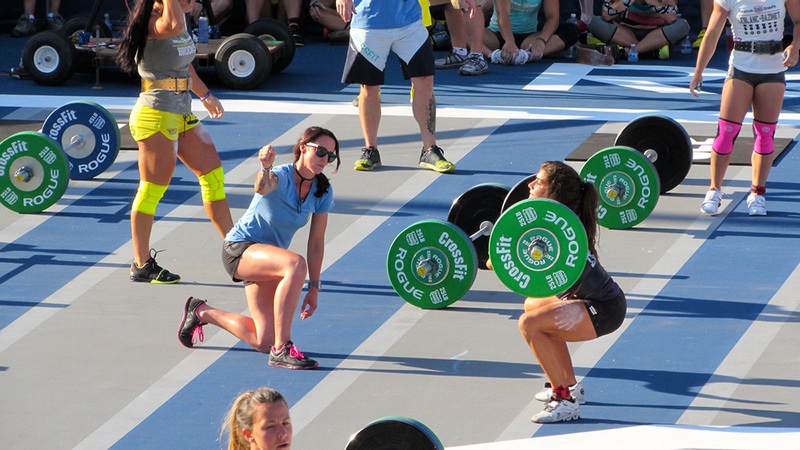 When the men took to the mat, their starting weight was 245. With a display of technique, speed, strength, and (most importantly) muscle endurance, they worked their way across the court. As the weight progressively increased, the playing field thinned. Fan favorite Chris Spealler methodically worked the floor and cleared the 275lb clean at the end of his heat with the crowd cheering him on. Cole Sager demolished his heat with a time of 27 seconds! 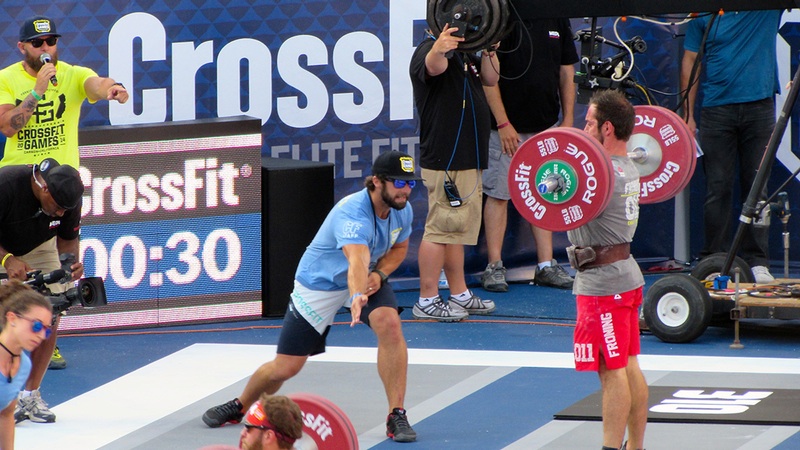 As the first round came to a close, it was time for the champ to take his place on the mat. On his first lift (245#), the champ stumbled 3 steps backwards. He was able to hold on and finish the clean, but the mistake cost him precious seconds. He bounced back for the semifinals, and in true form, as strength and muscle endurance took precedence over speed, he showed once again why he’s the champ. He walked the court during his heat looking like the Terminator, systematically destroying 280#, 290#, 300#, 305#, and finally 310#. However, he failed to progress to the final round because the entire next heat was faster than his first place in his own heat. To his credit, he was composed on the sideline while he watched the final wave; but one could not help but think there was visible frustration on his face. Froning was now in a position he has not seen for a very, very long time (if ever): he was spectator to an event many thought he already had in the bag. This predicament would be costly, and going into the final event of the night, he would need to put on a show if he was thinking of having any part in the winner’s podium this year. 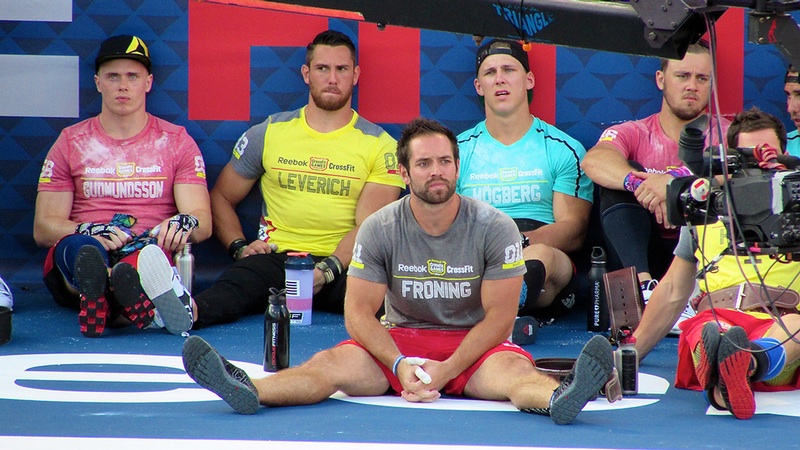 For the final event, athletes had to perform strict, deficit HSPUs and pull a weighted sled for 4 rounds (with each round seeing an increase in reps and weight). Teacher and mom Val Voboril was schooling the kids until Michelle Letendre started on her final sled pull. Letendre would take the event, and she now sits in 4th place overall. 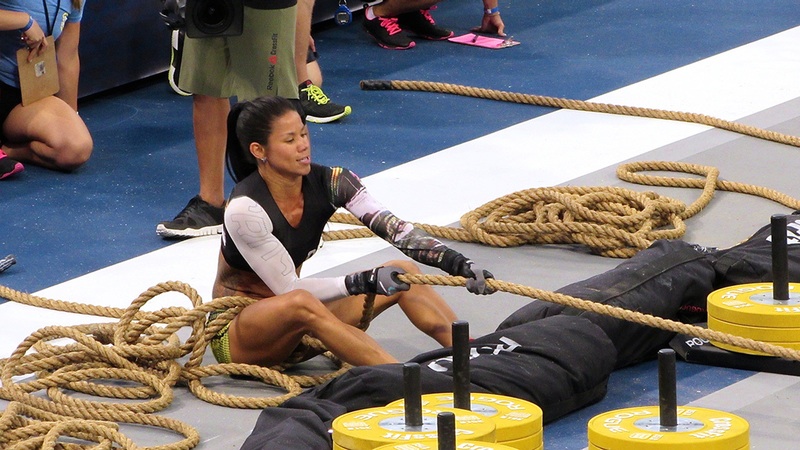 Leverich and Bailey began battling it out on the HSPUs, but Anderson snuck in there and tore through his final set of HSPUs unbroken (just like he did earlier in the muscle-up biathlon…I guess it doesn’t hurt that he only weighs in at 160#!!). With the crowd cheering him on, he pulled his final sled across the court and stood triumphant atop the podium. 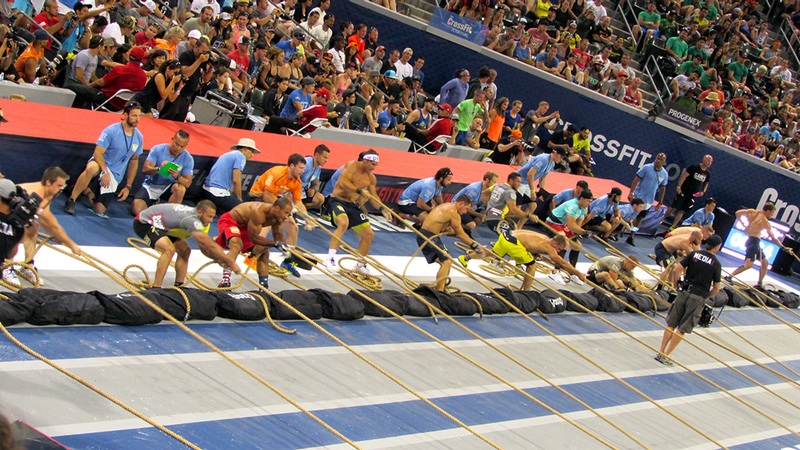 It looked like he had locked up for himself another win for the day, but the final heat showed the return of the Champ, who set a blistering pace alongside Josh Bridges, going almost rep for rep with him on the HSPUs. Though the champ could not keep up with Bridges’ pace on the strict HSPUs, he showed his true power and form as he dragged the progressively heavier sled 4 times across the court, each time catching up to Bridges. On the 4th round Bridges had already started pulling his sled across the court while the champ had 2 HSPUs left. One would think Bridges had it in the bag, but the champ wasn’t letting up. He finished his deficit HSPUs, calmly jogged across the court, and began to pull. If it weren’t for the sandbag braces near his feet shifting so much, he would have surpassed Bridges and won the event overall. With each powerful pull, the champ made up tremendous ground on Bridges, but alas at the end, Bridges came out triumphant.

One would have never guessed that Froning lost the event, because he was now all smiles on top of the platform. Why? The CrossFit Games determines it’s leaderboard by an overall point system, and though Froning’s 2nd place finish was still a loss, other competitors (like Scott Panchik, who before this event was sitting very nicely in 3rd place, but yet had a miserable showing in this final event…eventually placing 29th overall[!!!]) who were formerly ahead of him fell by the wayside in this final event. So with one day left to go…

Our men’s leader at The CrossFit Games is Rich Froning. He has a narrow lead and will need to have a great day tomorrow to hold on. On the women’s side, Camille has established a very comfortable lead for herself, and surely will not have as much stress on her shoulders as the champ. 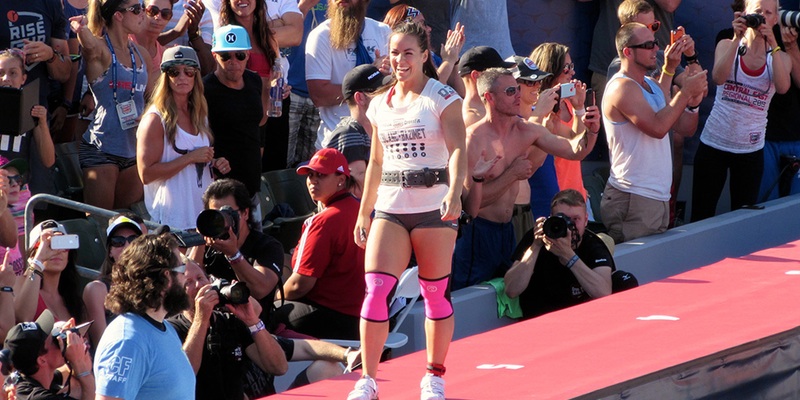 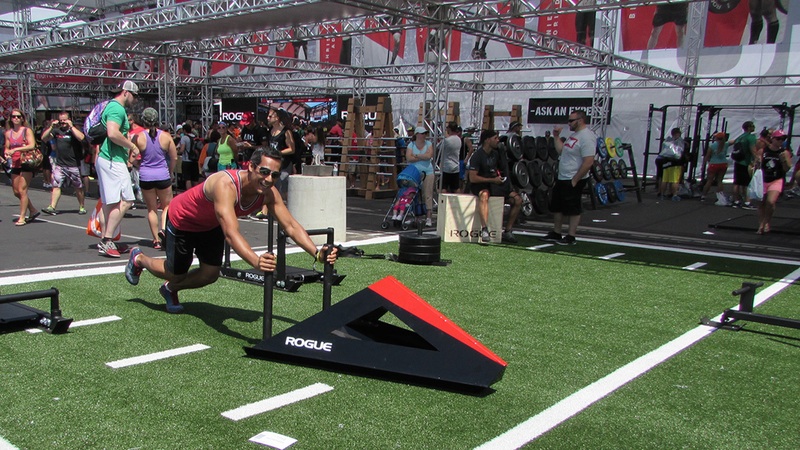