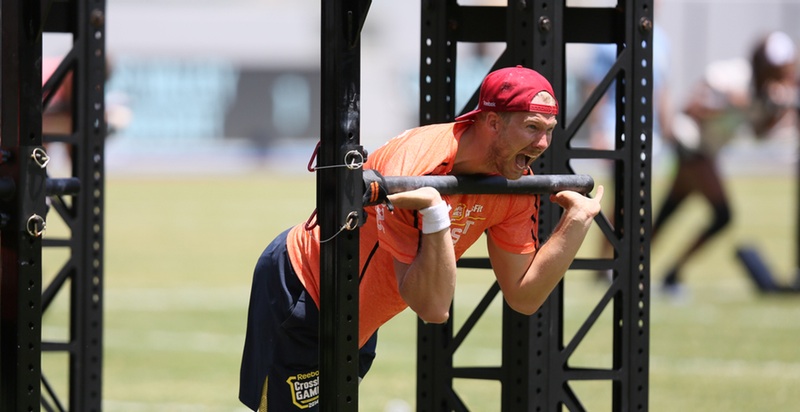 The dust was flying, the bars were banging, and the sleds were…well, they pretty much stopped everyone in their tracks. Day 1 of the Games got off to a leg crushing start.

From the opener, this day was going to be about endurance. The teams ran, the individuals tripled (3000m row, 300 DUs, 3 mile run), the champ walked, and there was an all out foot race at the end of the women’s Triple 3 (and that’s after Tiffany Hendrickson stumbled and appeared to have momentarily passed out! Exciting and scary stuff going on here. And yes, she’s ok and competed throughout the day).

Things got even spicier when the teams came back to the soccer stadium for event 2 of The Games: Frantasyland 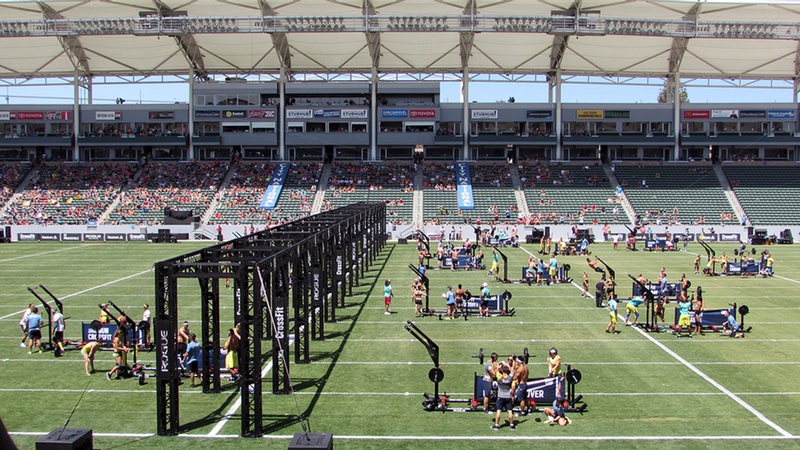 (Castro’s own version of a twisted amusement park, and as you can guess…it was no stroll through The Magic Kingdom). Rogue custom built a 1000# 6-person sled which teams had to push 100 yards, while each individual member performed 3 different versions of Fran along the way. 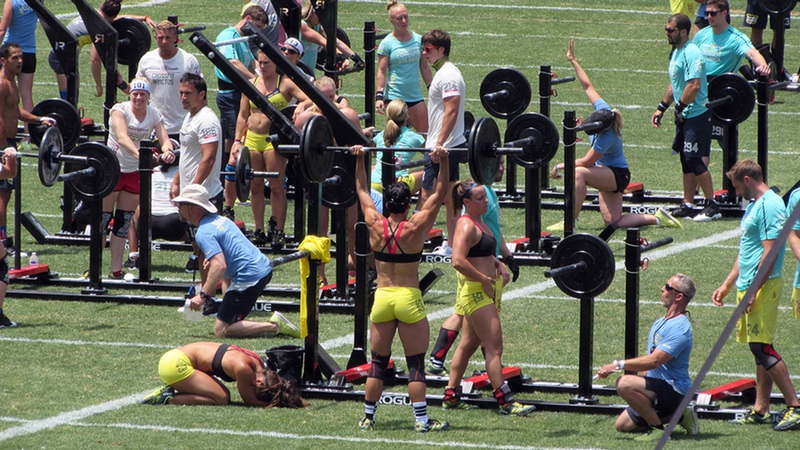 If your quads aren’t blown up yet by the thought of all those thrusters, just think how the individual men and women felt as they had to sprint with a weighted sled across the soccer field. 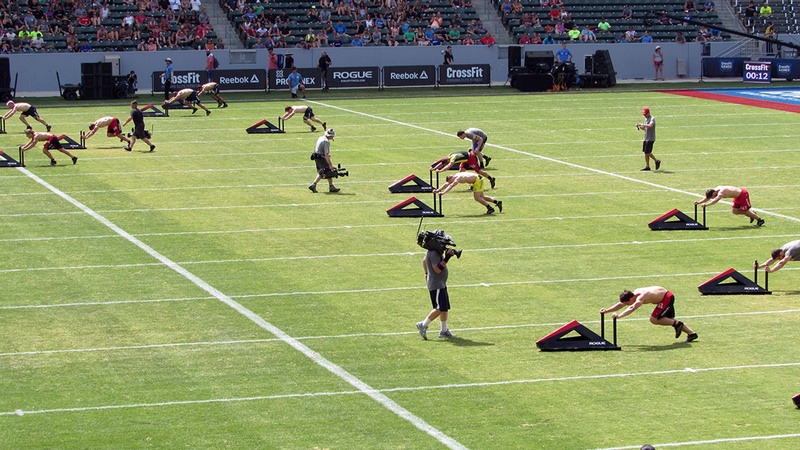 The Champ sure was feeling it. After taking a few breathers today during the Triple 3’s final 3mi run (in which he looked out of breath and hobbling on a taped up calf… Seriously, I wanted to channel my inner Ricky Schroeder and cry, “c’mon,champ…wake up!” The Champ, anyone? Anyone? Bueller? Bueller??), he had a hard time with the sled. Running has never been the champ’s strong suit (asked what he hates most, without skipping a beat he’ll say running :). Like every other crossfitter out there…well, except for Neal Maddox, who left a trail of scorched earth under his feet as he blazed through the sled course), so it was no surprise to see the champ struggle a bit. 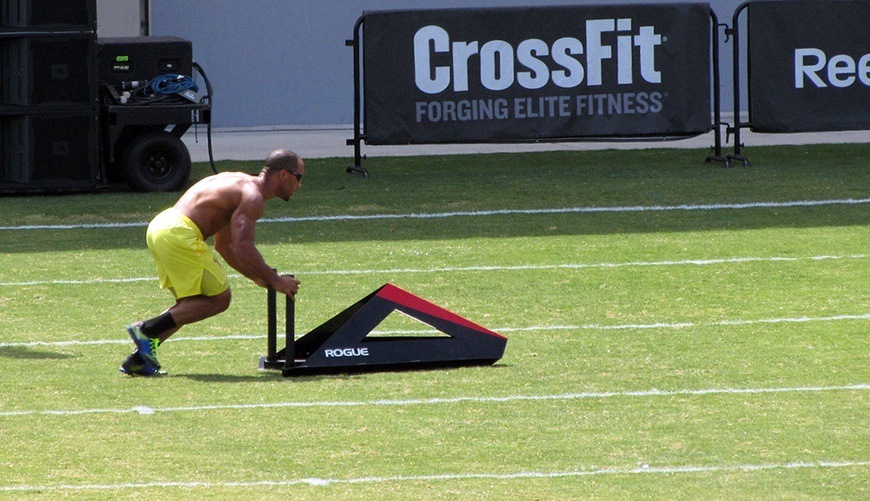 The people’s rookie, Lauren Fisher, had a miserable time with the sled, not finishing the second leg of the event. But she was all smiles when she lifted her tired body off the sled and gave a wave to the crowd.

The universe seemed to correct itself when the 21-15-9 complex started in the tennis stadium. Well…as well as can be expected at The Games. In true CrossFit community style, the athletes entered from the back of the stadium and down the stairs in the midst of many an adoring CrossFit athlete (well done HQ for planning this out…a welcome change that really brought that communal aspect of CrossFit to the forefront of The Games). 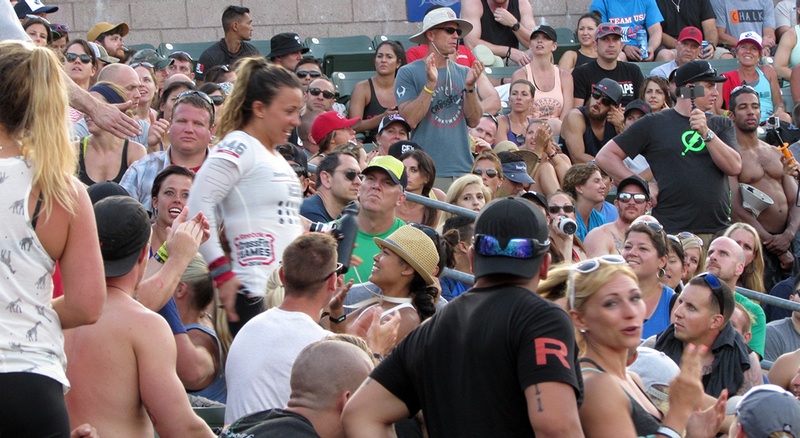 Lucas Parker struggled, faltered; Akinwale looked strong and composed; and the champ had his game face back on and crushed the 3rd heat, putting on a clinic for both the athletes and the fans (he would eventually win the event overall with a soul-crushing 4:16 time. Bridges [4:26] and Khalipa [4:29] put on a blistering pace in the 4th heat, but came up short by 10 secs behind the champ), all the while reminding people why he’s the 3-time CrossFit champion.

Apart from all this excitement, maybe the real story that comes out from today’s events deals with a little blood and a well-worn glove. During the men’s 3rd heat, Koski endured a nasty hand rip. With a palm covered in bright scarlet blood (witnessed by my own eyes as we were seated directly in front of his rig) and a rig clearly covered in blood-stained chalk, he couldn’t get through the final bar muscle-up to finish the complex and stand on the mat. In true CrossFit community style, Maddox ran over, ripped off his right glove and handed it to Koski, who then proceeded to crush that final bar muscle-up to the thunderous applause of the crowd.

To round out the night, the women’s heat 3 and 4 took to the mat with Julie Foucher, Lauren Fisher, “Iceland” Annie Thorisdottir (who almost wins for coolest name everrr…but Bjork Odinsdottir happens to be here as well. I. Kid. You. Not.), and Chyna Cho. If you thought Rich was fast, you ought to witness “Iceland” Annie move a bar. She took the lead and almost had it until grade-school teacher, Valerie Voboril, squeaked past her by a few milliseconds! Both athletes were all smiles at the end. As the final heat ended, Camille took the event with a smoking hot 4:50 (seriously folks, it looked good…even after she slipped off the rig during the first complex). 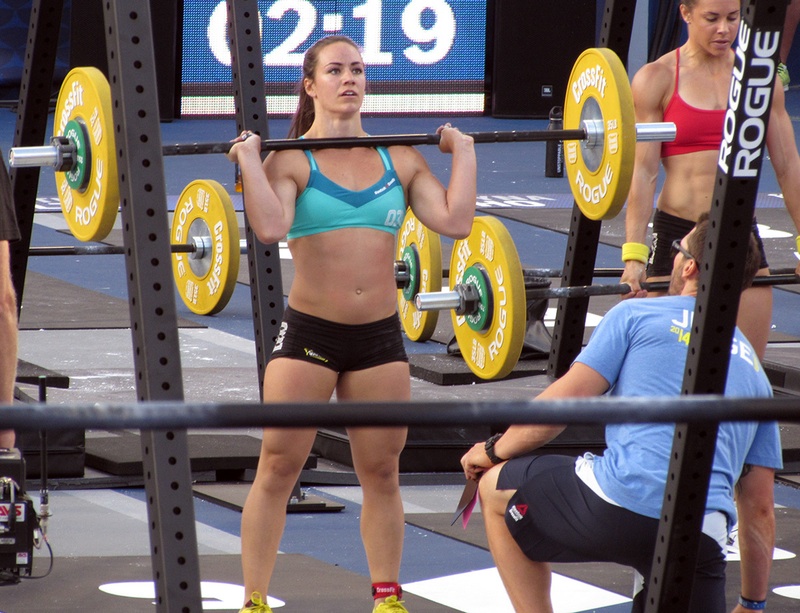 As the night ends, we have Jason Khalipa, (the rookie) Neal Ohlsen, and Josh Bridges leading (respectively). On the women’s side we have Kara Webb, Camille Leblanc-Bazinet, and Julie Foucher. On the team side we have Invictus, Crossfit Syndicate, and NorCal Crossfit. 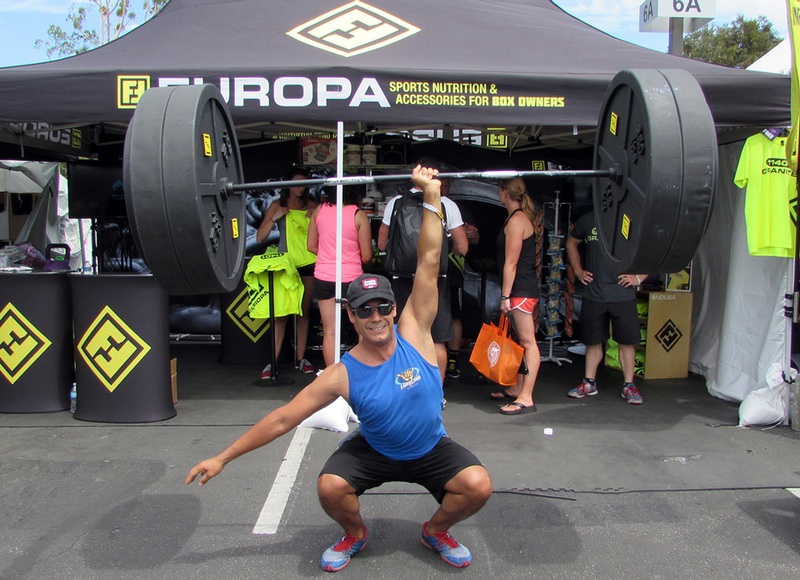