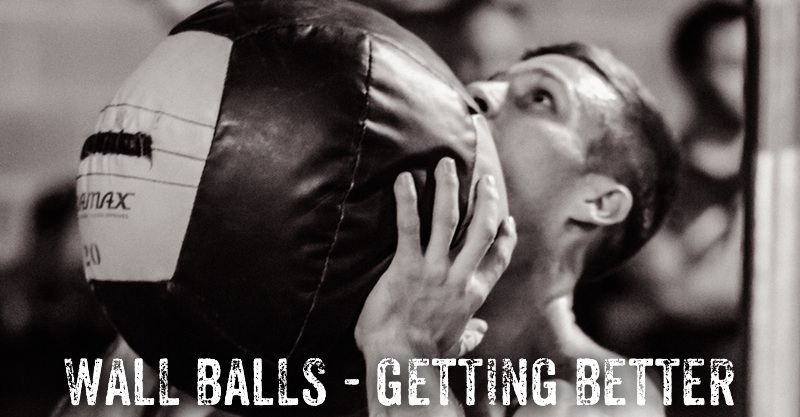 Wall ball shots are a classic movement that every CrossFit athlete has to face. Here are 5 tips to help you get as many as possible next time they appear in the WOD:

This is probably the most important factor in being able to string together unbroken wall balls. If the elbows are flared out, the shoulders will fatigue quickly. Instead, keep the elbows tight engaging the triceps and lats. This will make your wall ball shots far more efficient and allow you to get many more in a row.

It’s only a 20 pound ball to a ten foot target. Surely anybody with a decent amount of strength could just toss the ball up there rep after rep right?? Well, we all know those reps add up quick! It’s true that you may be able to get away without maximizing hip drive, but in order to be as efficient as possible and save valuable energy, it’s important to use your hips during wall balls. Concentrate on driving out of the hole fast and with powerful hips – similar to the way you would on a thruster. Using your arms to throw the ball to the target will cause fatigue quickly. The hips are the strongest part of the body – use them.

This secret to success is related to #2. During a good wall ball, the arms are mostly along for the ride. The most important function of the arms is to control the ball on the way up and hit the target with accuracy. An athlete using good hip drive will be more than strong enough to throw the ball above the target. In order to stay smooth and consistent, focus on hitting the center of the target so you can get a consistent rebound and get into a rhythm.

One of the most common mistakes during wall balls is trying to hold the ball in front of the chest or abs. I was guilty of this mistake when I started doing wall balls. The problem with letting the ball drop is that it puts the back in a rounded position. It can also cause the athlete to drop the ball, engage the arms too much and lack depth on the squat portion of the wall ball. The athlete may not even realize that he or she is missing depth because it will feel like a full squat. Focus on keeping the ball right in front of your face (the bottom of the ball should be at or above the top of your chest) to maintain a good squat position.

Wall balls are one of those movements that are completed much more quickly when strung together as opposed to being broken up. That being said, few athletes will be able to complete a WOD like Karen (150 wall balls for time) unbroken. Practice wall ball sets during your skill work to see where your threshold is. It’s important to break BEFORE you hit that redline where you can no longer string multiple reps together. This tip takes some practice as well as knowing yourself as an athlete, but when applied correctly, it will drastically improve your score on the white board.